My passion for cinema started really early and quickly, when I was a little boy

Here You Will Know More About My Adventure, Starting In My Childhood Until Today

I was born on the 8th of May 1981 to Italian parents. I grew up in the region of Lake Geneva in Switzerland.

I have wanted to work in the cinema industry since I was a little kid. When I was twelve years old, I convinced my classmates to shoot a movie in a forest in Bussigny, where we would play commandos. We had saved a small amount of money and had bought toy guns and military costumes. The mission was to save our superior who had been caught by the rebels. We had borrowed my dad’s old VHS camcorder and as you can imagine, it was really damaged and my dad was really furious. I never regretted doing it though.

Throughout my school years, I managed to convince my friends to make different types of movies. They really played along and enjoyed it. Today, we still love to recall those memories. Even if for them, filming just meant having a good time, for me it was already the beginning of an adventure.

After that, I started an apprenticeship until 2011 in order to become a carpenter. I fully engaged myself in this work because I had made a promise to my parents. They wanted me to have a proper job, so security would be guaranteed. 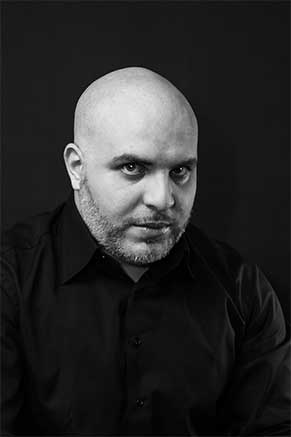 Even if I had to start this job, the passion I was born for always remained within me. I had the opportunity to be present on the set of several short and full-length movies such as Verso, from Xavier Ruiz, starring Carlos Leal and Laurent Lucas, in which I made a brief appearance as a police officer in an action scene.

Of course, I never stopped writing storylines and even tried directing several times in 2003 and until 2007. Unfortunately, due to low budget, those projects were never finalized. I also attended classes with Veronique Amstutz, who works as a director at Radio Télévision Suisse, a Swiss broadcasting organization and television channel and with Florence Quarteloud, a Swiss actress.

In January 2008, I wrote and directed three 20-minute episodes but again due to budget restrictions, those were only amateur projects.

In 2012, I started producing my first medium-length movie, that I wrote and directed helped by an amazing technical crew and three talented actors, Frédérique Dupré, Erik Chantry and the young Romane Caillé. The film was also presented in several film festivals, including Cannes in the category out of competition.

In 2013, I decided to work on another type of drama, a short film about the life of a woman suffering from an incurable mental disease. The movie is called 19 and was filmed in Lyon (France). A group of twenty-five people, six months and two days of shooting were necessary, with a ten thousand euros budget, of which five thousand came from donations and sponsors.

For 2016 and the next four years, I will work on several projects, including a web series currently in writing and in preparation. The actor Yannick Guiraud is set to play the role of Paul, the main character.

Meanwhile, I am working on my first full-length film based on a true story and on a short film. I do no want to be too far from a movie set because this is where I feel most comfortable.

JI am a very dynamic person and I enjoy being involved in different projects at the same time, when it comes to career or my private life.
I love to laugh and joke about any daily life topic because I think life is hard enough to make a big deal about unimportant stuff. I have a lot of ambition and I have been a cinematic art enthusiast for more than 25 years.

Like every other amateur, my dream is obviously to become one day of one the most renowned director in the history of cinema.